What is CBD oil?

CBD oil or cannabidiol oil is a substance derived from the hemp or cannabis plant containing high amounts of the cannabinoid cannabidiol.

To extract CBD oil from the cannabis plant, producers need to isolate the CBD from the THC to ensure that the oil will not be psychoactive.

What does CBD oil do? 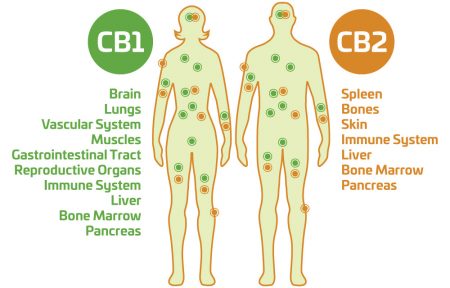 To answer this, we need to take a step back to address the endocannabinoid system, a system within the body whose receptors (CB1 and CB2) have an enormous impact on our health and well-being.

“CB1 receptors in the brain are associated with emotions, mood, appetite, coordination, movement, and pain,” explains Stormy Simon, the former president of Overstock.com who recently left the corporate world to become an advocate for cannabis. “CB2 receptors are found in the immune system and throughout tissues of the spleen and tonsils.”

The endocannabinoid system is a relatively new discovery. In fact, Simon notes, it was discovered and named after the cannabinoids in the cannabis plant. Seeing as cannabinoids are the compounds that activate this system, many have agreed that cannabinoids like THC or CBD could help improve endocannabinoid function. The ECS helps to regulate functions such as sleep, immune-system responses, and pain.

Does CBD make you high?

CBD is an entirely different compound from THC, and its effects are very complex. It is not psychoactive, meaning it does not produce a “high” or change a person’s state of mind, but it influences the body to use its own endocannabinoids more effectively.

According to one study posted to Neurotherapeutics, this is because CBD itself does very little to the ECS. Instead, it activates or inhibits other compounds in the endocannabinoid system.

For example, CBD stops the body from absorbing anandamide, a compound associated with regulating pain. So, increased levels of anandamide in the bloodstream may reduce the amount of pain a person feels.

Cannabidiol may also limit inflammation in the brain and nervous system, which may benefit people experiencing pain, insomnia, and certain immune-system responses.

Some CBD Benefits Include:

CBD oil is popular for easing pain associated with arthritis.

A study in the European Journal of Pain used an animal model to see if CBD could help people with arthritis manage their pain. Researchers applied a topical gel containing CBD to rats with arthritis for 4 days.

Their researchers note a significant drop in inflammation and signs of pain, without additional side effects.

The same report studied CBD use for general chronic pain. Researchers compiled the results of multiple systematic reviews covering dozens of trials and studies. Their research concluded that there is substantial evidence that cannabis is an effective treatment for chronic pain in adults.

A separate study in the Journal of Experimental Medicine supports these results. This research suggests that using CBD can reduce pain and inflammation.

The researchers also found that subjects were not likely to build up a tolerance to the effects of CBD, so they would not need to increase their dose continually.

They noted that cannabinoids, such as CBD, could offer helpful new treatments for people with chronic pain. 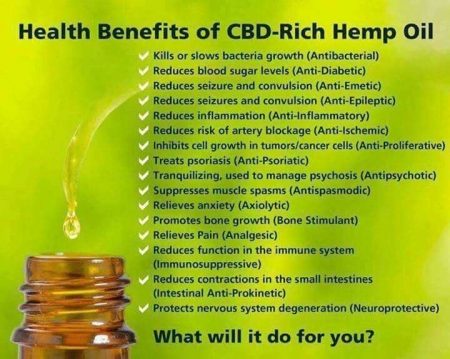 Multiple sclerosis (MS) is an autoimmune disease that affects the entire body through the nerves and brain.

Muscle spasms are one of the most common symptoms of MS. These spasms can be so great they cause constant pain in some people.

One report found that short-term use of CBD oil could reduce the levels of spasticity a person feels. The results are modest, but many people reported a reduction in symptoms. More studies on humans are needed to verify these results.

Anxiety disorders are the most prominent mental health conditions in the United States, affecting an estimated 31.1% of US adults. CBD interacts with the cannabinoid type 1 receptor (CB1R), the serotonin 5-HT1A receptor, and other receptors in the brain that regulate fear and anxiety-induced behaviors.Studies also found preclinical and clinical evidence that established CBD as an effective treatment for
numerous types of anxiety disorders including:


Side effects – The potential side effects of CBD are few and far between:

Serving Information
CBD can be consumed in a myriad of ways: oil, capsules, edibles, and even topicals.
Start with a small serving of CBD and increase slowly until you reach your desired effect. Your ideal serving of CBD depends on a lot of factors, like body weight, body chemistry, the condition you’re treating, and the concentration of CBD in the product you’re using.

Earn points just for signing up!

Be among the first to know about new products, special sales, and Rewards Member perks and offers!