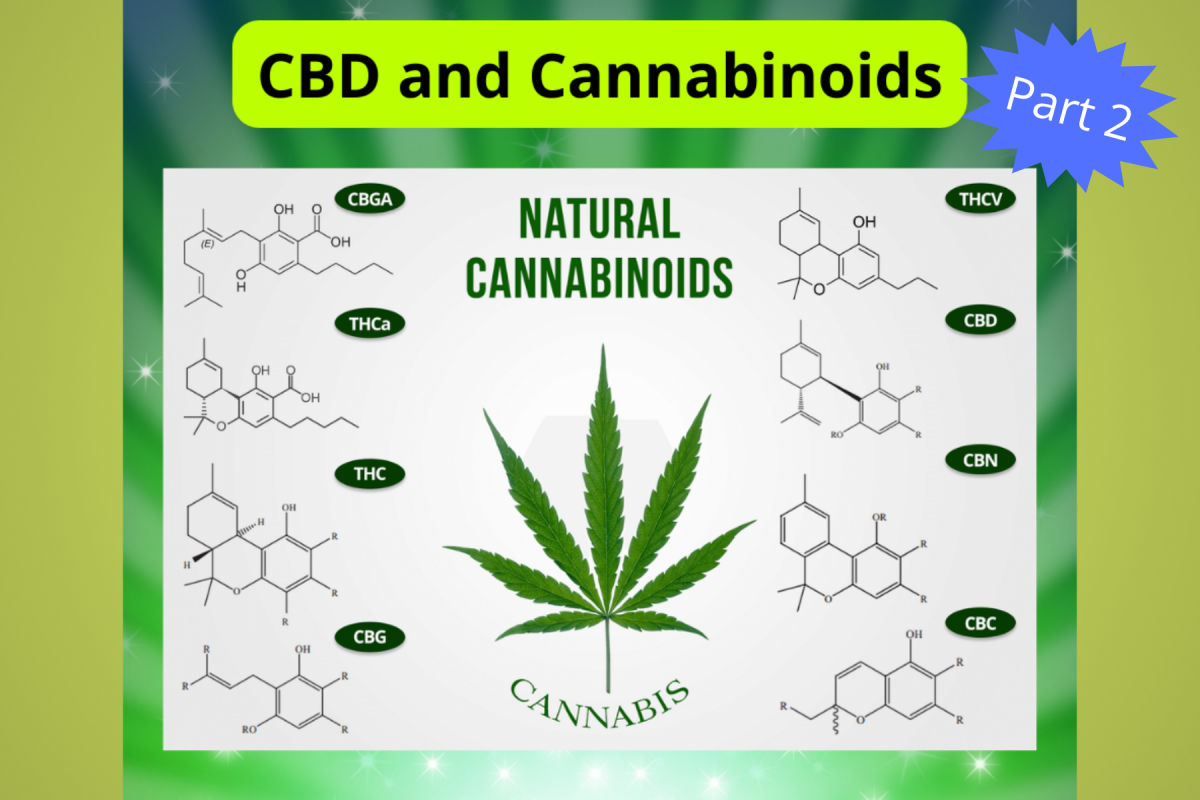 Our previous article, CBD and Cannabinoids, examined the benefits and effects of CBD and a few of the minor cannabinoids found in the hemp plant. By now, you’ve probably heard of CBD and its wonderful positive effects on our bodies. CBD is short for “cannabidiol” which is simply a non-psychoactive constituent of the cannabis plant family. Cannabidiol is only one of about 113 known cannabinoids. A cannabinoid is any of the various organic substances found in cannabis. In this article, we will discuss other common cannabinoids.

CBG (cannabigerol) is sometimes referred to as the “Mother of all cannabinoids”. According to CNBS.org, “The precursor to CBG is CBGA. Before a plant reaches maturity, its CBGA synthesizes and turns into THCA, CBDA, and the precursors to several other cannabinoids. Once those cannabinoids are decarboxylated, they turn into their better-known versions: THC, CBD, CBG, etc. Without CBGA, none of these cannabinoids could exist at all.

Like CBD, CBG can help boost the levels of natural chemicals in the brain, possibly making it useful as an anti-anxiety treatment and antidepressant. It helps reduce eye pressure in people with glaucoma and is an excellent anti-inflammatory. Doctors are looking into CBG as a neuroprotective agent for people with degenerative brain diseases such as Huntington’s disease, as well as potential tumor-inhibitor for certain kinds of breast cancer.

Other benefits of CBG can include:

Although CBN (cannabinol) is a minor cannabinoid, it plays a very important part. Fresh plants typically contain very little CBNA or CBN because this cannabinoid begins to appear as the plant material ages. Over time, the THC in it begins to turn into CBN. As it ages, the THCA inside of it converts to CBNA. Basically, CBN is THC’s child.

The benefits of CBN can include:

THC (tetrahydrocannabinol) is a cannabinoid that has been generally associated with marijuana and getting “high”. It is important to know that the hemp plant contains very little THC, unlike the marijuana plant. Since the majority of CBD products come from the hemp plant, they contain only trace amounts of THC. For example, the amount of THC in an entire bottle of CBD oil could never come close enough to produce a “high” feeling.

THC has come into its own not just as a recreational drug, but as a fascinating compound with true medical potential. As legalization expands, the research continues into THC and how it can be used as a medical treatment. However, after thousands of years of use, it’s safe to say that scientists have only just scratched the surface of the potential contained in this famous cannabinoid.

The benefits of THC can include:

Thankfully, studies are constantly being conducted to uncover more information on cannabinoids and their effects. However, it is widely believed by industry leaders that quality CBD products containing these cannabinoids are of immense advantage. Companies like Green Balance CBD carry many products rich in these beneficial cannabinoids. Take charge and invest in your body now!

Join our Rewards Program
Earn points just for signing up!